From my imaging specialist pal…

“If it is emphysematous gastritis then they would see gas in the gastric wall on ultrasound, which would appear as hyperechoic foci with reverberation artefacts, this can be difficult to appreciate when there is gas in the lumen, so usually takes several goes at looking through the gastric wall carefully and possibly from different sides/angles (pic below from that paper). Usually, the gastric wall looks thickened and abnormal as well. They may also see it on radiographs (see pic below again from paper).

It appears from that paper if the patient does not have systemic signs then they tend to do ok and the diagnosis would be more of a benign gastric emphysema and treatment wise just standard gastritis treatment. If patient not doing well, then more towards emphysematous gastritis and then they do not do very well (all patients in that paper were PTS). I specifically remember one of the cases from that paper as I scanned it, which was a case that did well and the gastric emphysema was presumed clinically insignificant in that case…. I have not had any further cases since.

If the dog in question is doing well not sure how useful any more imaging/follow-up ultrasound images of stomach would be tbh.”

Turns out she was involved with some of the cases in the paper! 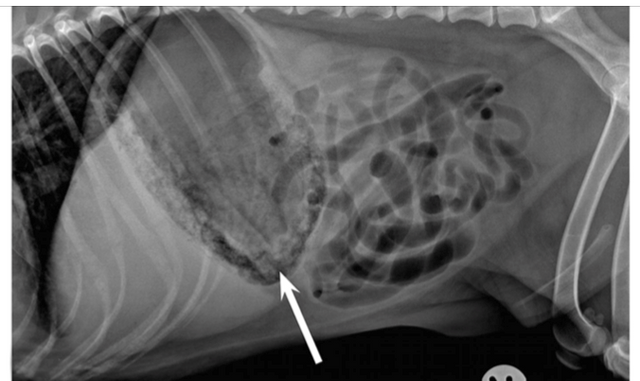 Log in to access any credits you've previously purchased, or those you hold on your account as part of your membership. Members receive inclusive credits when the free trial period has ended.

Please note that this service is for non-urgent advice only.

Are you sure you want to remove this user?